Some animals never sleep and they have a lot to say.

In her latest installation at Murray Guy, Ann Lislegaard expands upon her fascination with science fiction. On entering the gallery, the viewer is confronted with a large projection of a talking owl and its mirror image. It speaks and squawks in a distorted voice both human and mechanical. An animation in the other room, Dobaded, brings one into a floating, amorphous space wherein books refer to ghosts and side trips into an imaginary future. Images of shadows and light create a revolving, multi-dimensional landscape. References abound from Philip K. Dick’s Do Androids Dream of Electric Sheep, to J.G. Ballard, to surrealist art.

The owl that holds the front room is mesmerizing as it moves in ways both bird-like and mechanical. A whirring noise accompanies some of its movements. Yet it also moves its ears and feet in a manner reminiscent of an actual owl. It recites phrases from the I Ching that come across in a technically altered voice. Some words are understandable while some are not. The owl calls for Rachel, in Harrison Ford’s voice, bringing up memories of Bladerunner, the film based on Dick’s novel, Do Androids Dream of Electric Sheep.

In Bladerunner the owl represents the life form that first disappeared in a post-apocalyptic world. In the film it is a silent witness. Here it is an oracle bringing information from other worlds. In one part of the projection its eyes show the reflection of flames. In another, its eyes have disappeared, replaced by black voids. It’s otherworldly aspect of being both robotic and animal is compelling and disturbing. The owl is a witness with tales to tell but its message is indecipherable. Like other oracles, it is “speaking in tongues,” one of its phrases.

The animation rendering this surreal world is black and white. The camera pans upward across a bookshelf. Here, books take the place of billboards, as the camera moved vertically in Bladerunner, zooming upward over the cityscape. The names of the titles on the shelf stand out; Vertical Light, Psychedelia, and works by several well-known science fiction writers. The camera then moves into an amorphous space. It is one of revolving light and shadows. Any semblance of geometric space is lost. This space has no bottom. A large tangle of wires creates another web of shadows. While referencing Duchamp’s, One Mile of String, this tangle could also be a confusion of wires. The camera comes to rest on a landscape with a reflective sphere in the center. Around the sphere are mobiles, referencing the work of surrealist artists. The owl makes an appearance as does a dog. A hand reaches down to deposit a flower. This is the flower from Weena in H.G. Wells’ Time Machine. In the novel, the flower is proof that the protagonist has visited the future. A 3D printed sculpture of this same flower sits in the front room of the installation.

With its many references to surrealist art and science fiction, Lislegaard’s work delineates a space where past, present and future collide in imaginary worlds. The animation periodically breaks up into pixelated, grayscale grids as one tries to gain their footing only to slide into another indeterminate space. This journey provides the viewer with an entry point into the fascination that science fiction holds. At once compelling and frightening, this strange universe haunted by the past and the future begs to be explored. WM 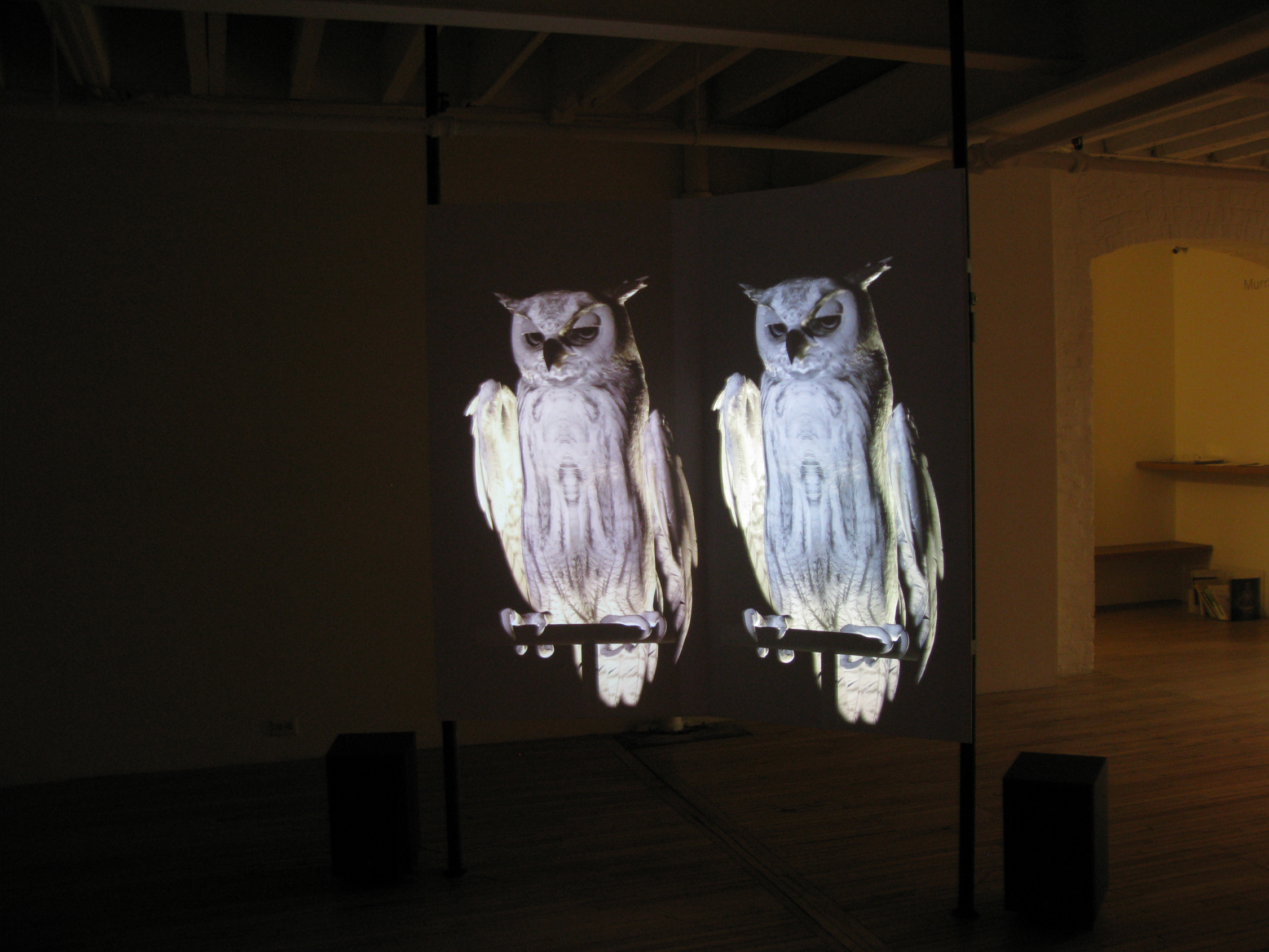 She has been showing in New York since the mid 80s, as well as internationally. Recent shows include Exit Art and PS122. She has written for various downtown publications.