The Invented Narratives of Andrew Sendor at Sperone Westwater

“Delicates”, a solo exhibition by Andrew Sendor currently up at New York’s Sperone Westwater, is a collection of the artist’s drawings, paintings, and video, all hailing the techniques characteristic of photorealism. In spite of this technical descriptor, Sendor’s work does not share the same intentions of traditional photorealistic work. Rather than a mimetic interaction with photography, or approaching photography by way of a different medium, his drawings and paintings are scenes from the artist’s invented narratives. What’s more, these narratives are of a mystical nature, for which Sendor employs a reoccurring cast of characters that compose a strange and enigmatic other-reality. As such, Sendor’s scenes embody collisions of the real and the surreal, each assisting in the other’s illumination.

In an essay by Michael Rush, Sendor’s most recent work is described as having a preoccupation with cinema, particularly the qualities of cinematic documentation (or moments captured and repeated on film). His works have such titles as "Six replicas of stills from the documentary Interview Sessions with Francis Gray: On Appraising Rare Objects”, and “Seven scenes from the documentary The Interior of Delicates & The Enigma of Boris Flumzy (2029)", both of which reference characters of Sendor’s own design and “documentaries” about these characters that were never actually made—a detail evidenced in part by the time stamp from the future.

In drawing and painting these “film” stills, Sendor mimics the nature of the film reel—in other words, the act of framing moments sequentially, showing them beside one another, and with minimal variation between images. One painting entitled "Four scenes from the documentary Interview Sessions with Francis Gray: On Fate, Chance & Circumstance”, for instance, is composed of two black and white framings of Sendor’s Francis Gray sitting at a table. Both images, shown one after the other like segments on a reel, appear to be the same image but with slight variation (in the movement of Francis’ hands, or the peeling back of the curtain that hangs behind her). In another piece, this one a drawing, entitled "Six replicas of stills from the documentary Interview Sessions with Francis Gray: On Appraising Rare Objects”, in the top right portion of the frame, Francis Gray is shown sitting at table with a pair of mysterious, gloved hands. Then, in the bottom left portion of the frame, there is a zoomed-in depiction of the same image, showing only her hands with the gloved hands. This move calls to mind a sort of storyboarding, as the sequential nature of the images signifies a narrative landscape.

One characteristic of Sendor’s work that sets it apart from photorealism, particularly hyperrealism, is the use of negative space in his pieces: the blank space in the middle of the drawing between the frame showing Francis Gray and the gloved hands and the zoomed-in frame showing only hands; the space on the canvas separating sequential “slides”; and the space within the scenes themselves that is silhouetted or blacked out by shadow. In the last instance, extra attention is to be paid to the objects floating in that negative space, emphasizing the extreme precision and detail with which Sendor has executed his renderings. Additionally, the negative space that Sendor utilizes acts as yet another method for collapsing time—creating (what the press release for the show describes as) “stories suspended mid-telling”, and “installation photographs of exhibitions yet unstaged”.

Ultimately, it seems as though Sendor is interested in the play between the technical and conceptual realms of realism. At times he demonstrates interest in realism technically (as indicated by a formal mastery of his media and the labor that must have gone in to such precise renderings), but at the same time shows a strong disinterest in realism conceptually. The transparency that realism might imply, for instance, is certainly not of interest to Sendor, as the scenes and narratives that he constructs are consistently fragmented. Much like the cinematic genre of “documentary-fiction”, Sendor’s work indulges in an inherent contradiction of terms.

Finally, the one video piece Sendor has for consideration in the show (FENOMENO), which is actually his first film project, is a highly produced, 13-minute film, acting almost as the full iteration of the “drafts” that are his works on paper. FENOMENO chronicles a series of mysterious rituals performed by his infamous cast of characters, that culminate in what is described as a spiritual cleansing ceremony in which these same, eccentric individuals burn the protagonist in effigy. Rather than answering what narrative questions the viewer has in seeing his drawings and paintings, the video instead stretches his landscape—the liminal space within which Sendor functions—and transforms it into the moving image. WM

“Delicates” will be on view at Sperone Westwater through April 11, 2015. 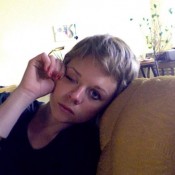 Cassie Cummins is a writer in New York City.