Patrticia Piccinini: Those Who Dream by Night
Haunch of Venison
28th of November-12th of January

Patricia Piccinini is a contemporary artist of a rare kind. Her hyperrealist work is the result of a consistent mix of different elements borrowing from the personal-mythological, the philosophical, and a refined taste for the obsessive materiality of patient craft. Her show, titled Those Who Dream by Night, at Haunch of Venison in London proposed a selection of some of the most recent work from 2012, a classic from the ‘modified scooters series’ and some slightly older work.

Piccinini’s personal mythology-making lies at the core of the seductive quality of her work. She constructs for herself and subsequently, for her viewer, a world of incongruent intimacy in which nothing is determinately bad or unquestionably, reassuringly good. This boundary-blurring of essential dichotomies provides the possibility for a world that philosopher George Bataille would have found extremely enticing, to emerge; one in which orifices secrete honey-like substances which are life-giving rather than useless waste; a world in which animal fur and human hair ambiguously merge on the surfaces of bas-relief surfaces bringing together painting and sculpture evocating the presence of utterly believable living human skin. In this world, openings ambiguously offer themselves as exits and entrances to biomorphic bodies caught up between the monstrous and the tender, referencing classical mythical creatures through unorthodox compounds of steel, flesh, rubber and hair.

Piccinini’s hyperrealism is interesting in that it distinguishes itself from that of other contemporary artists through the deliberate incorporation of abjection; a quality that arrests the viewer in order to question the certainties which separate human, animal, machine, the everyday and the mythological. Hybridity is Piccinini’s veichle of preference for addressing some of the most pressing questions posed by the recent developments in the post-humanist discourse which radically questions anthropocentrism for the purpose of envisioning a cultural turn in which networks of technoscientific knowledge and bodies are interwoven with the human and the non-human in a reconfiguration of co-dependent interconnectedness. 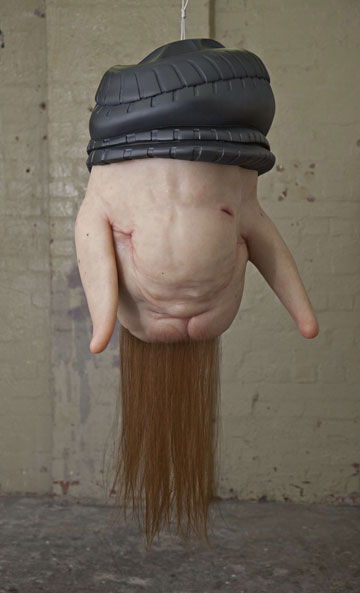 Therefore Piccinini’s hybrids like Ghost (2012) insistently defy the viewer’s temptation to categorise the encountered body within the realm of the machine, human or animal. Classifying the body becomes futile and besides the point for it is not only the different textures and materials which come together in the work to claim individual authenticity. Walking around the work provides an elusive experience in which the human and the animal (in this case the skin-surface and the overall shape of the body are successful in evoking the presence of a turkey), relentlessly appear indiscernible. The long hairs growing out of the bottom part of the body simultaneously signify a head and a bottom. The length of the hair simultaneously suggests human and animal: too long to be solely hide, too short to be the tail of a horse. The deformed rubber tyre which seemingly smuggles the upper part of this body is neither external to it nor intrinsically bound to it. It is just placed there, at times evoking a hat-shape over an absent or disfigured face which reminds us of how inclined we are to seeing a human face in anything which may lend itself to such projection.

On the upper floor of the gallery, Piccinini provides a truly show-stopping piece with The Carrier, a life-size hyperrealist sculpture in which a naked man-animal like figure carries a clothed older woman on his back. The gaze of the masculine figure bears a somewhat friendly aura, despite his corpulent stature and threatening claws. The woman is seemingly carried away by this mastodon in a peaceful and comfortable way as she echoes with her own arms and hands the posture by which her carrier transports her. This is the dream of classical art come true. Not through marble, but through silicon, paint, and real hair. There is nothing preventing you for from believing for a second or two that these bodies could indeed move or simply breath as soon as you turn around to leave the gallery. Again the image is one of symbiosis, trust, connection and synchronism. What seems good may not necessarily really be so and what could be bad, may be a saving grace. Seemingly opposing forces come from different histories and realities to co-exist in suspended harmony.

Slightly dissonant in its less disturbing or questioning presence is The Lovers (2011) consisting of two scooters embracing each other in a tender cuddle which conflates animal—you can easily project a buck and a doe—and machine in an apt anthropomorphic rendition. This is only one example of Piccinini’s extensive re-work of this theme through which she explores our almost unconscious need to humanize machines and mechanize animals in our everyday life. This is a work bearing a more immediate charm, sparing us the disconcerting abjection that contradistinguishes her more daring body of work here on show. In all honesty, this work does not really fit in this show but Haunch of Venison, though one of the best, is still a commercial one.

Go see Piccinini’s work in the flesh for, like with all hyperrealism, images cannot do justice to the utterly believable livingness she is able to cast on her silicon bodies. Upon living the exhibition, the ambiguity which marks the show is likely to stalk you for a while, continuously proposing the question: “were those human-animal-machine bodies a good or a bad omen for a not-so-distant future?” That’s when you know you have experienced some great art: when the questions it poses keeps following you outside the gallery…

Giovanni Aloi is an art historian in modern and contemporary art at the School of the Art Institute of Chicago, Sotheby’s Institute of Art New York and London, and Tate Galleries. He has curated art projects involving photography and the moving image is a BBC radio contributor, and his work has been translated into many languages. Aloi is Editor in Chief of Antennae: The Journal of Nature in Visual Culture www.antennae.org.uk.