Time magazine’s 2011 ‘Person of the Year,’ was “the protestor,” a commentary upon the swelling uprisings that began to pop up around the globe in late 2010 -- first in Tunisia, where a young fruit vendor set himself on fire in protest of government corruption, then across the Middle East and into the West, where anti-austerity-measure protests in countries like Greece and the Occupy Wall Street movement in the States have emerged as counterpoints to what has been dubbed The Arab Spring.

International insurrection takes center stage in Representation, Farrah Karapetian’s most recent suite of photograms, exhibited at Roberts & Tilton. With works that range in subject matter from riot police attacking citizens (Riot Police, 2011); to Zuccotti park Occupy tents (Tent Photograph, 2012); to smoke bombs (Aftermath, 2012) the artist attempts to wrestle our historical moment from the virtual image bank through which we increasingly experience it. The loose starting point in Riot Police, for example -- an enormous nine-by-thirteen foot piece featuring a fallen victim aside a mass of helmeted, shield-wielding riot police -- is a 2011 New York Times image of a protest in Kyrgyzstan. To create the photogram Karapetian brought a group of friends into the studio, clad them in military gear and instructed them to reenact the gestures depicted in the news photograph. Exposed numerous times against light-sensitive paper, their silhouetted bodies stammer, or flicker eerily up from a violet-hued background. Larger than-life, the photogram takes on the stature of an icon. 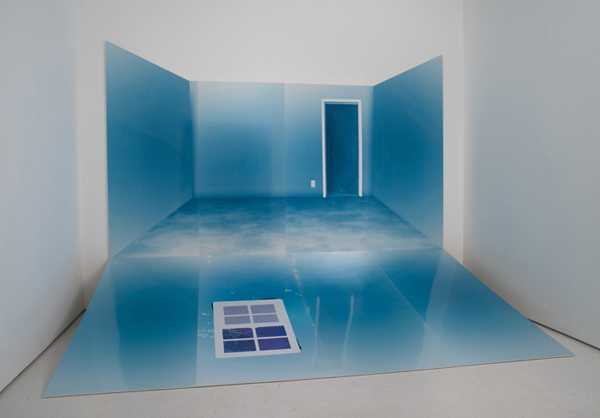 The monumental is also at work in Flyer Photograph (2011), a piece that occupies half the gallery, wrapping around both its northern and eastern walls. The source material here is the official guide of the April 6 uprising in Egypt. Originally circulated as a PDF on the web, the artist discovered this fascinating historical document while in the process of interviewing Ahmed Maher, the Nobel Prize nominated civil engineer instrumental in the revolt. Blown-up to a height of eight feet, the pamphlet, which strangely is both in Arabic and English, begins by listing the demands of the people (“The downfall of Hosni Mubarrak; The Cessation of Emergency Law; Freedom; Justice”) and moves on to instruct the populace on matters such as what sort of clothing and accessories to use (scarves “to protect your mouth and lungs from tear gas,” eye-glasses, etc.). To illustrate the text, Karapetian includes images of the gloves, shoes and hoodies referred to. Resembling x-rayed belongings that stream past today’s airport surveillance cameras, these semi-transparent forms refer not to real, wearable sneakers and sweatshirts but rather to resin casts of the originals fabricated in the studio, a method Karapetian has mastered in order to communicate a sense of volume that is absent when photogramming solid and opaque things. The casting process is in fact integral to the artist’s practice and points to a deep-seated interest in probing the line between sculpture and photography. Hence the cheeky exhibition title, Representation, an idea most literalized in Tent Photograph, the only three-dimensional work in the show. Masquerading as a real camping tent pitched atop the gallery floor, Tent Photograph is actually constructed from a photogram of a tent, which Karapetian stitched together, creating what operates as a sort of reverse trompe-l’oeil.

In 4th Wall (2012), an installation that occupies its own separate space in the project room, Karapetian’s play between the two-dimensional and the three-dimensional continues. Here, she presents a large-scale shiny blue photogram of an empty room. The room has no roof and its eponymous ‘fourth wall’ has toppled over so that it literally juts, eight feet, out onto the floor, acting as an angled sculptural ramp. A departure from the subject of civil unrest, 4th Wall refers to a tornado-damaged home in North Carolina. All that remains here is carpeting, a (photogrammed) silhouette of a smashed window, and a wooden door. Glancing back at the insurrectionary clamor in the main gallery, 4th Wall’s cold, sky-blue tint, a surreal hue that conjures up Magritte, has a strange muffling effect. Its door, like some Lynchian anti-chamber, leads nowhere, implying perhaps that we are not the attentive citizens that Karapetian’s more overtly political images might urge us to become; that we are instead, as T.S. Eliot put it, “hollow.” I look down at 4th Wall’s cracked window and think of Eliot’s lines from his 1925 masterpiece, Hollow Men. “Our dried voices. When we whisper together. Are quiet and meaningless. As wind in dry grass. Or rats' feet over broken glass...This is the way the world ends. Not with a bang but a whimper.”

Farrah Karapetian, Shadow of a Fist, 2012. Courtesy of the artist.

Yael Lipschutz is a Los Angeles and Joshua Tree-based curator and critic. As the Archivist of the Noah Purifoy Foundation she is currently co-organizing a Purifoy retrospective at the Los Angeles County Museum of Art with Franklin Sirmans. A PhD Candidate in Art History at the University of Southern California, her doctoral training specializes in Postwar and Contemporary Art, Critical Theory, Avant-Garde Film and the Black Arts Movement. She also teaches Modern Art at Loyola Marymount University and contributes to Flash Art, Art in America and Art US.