Joana Vasconcelos, Garden of Eden, 2010
Mixed Media
Courtesy of the artist and Haunch of Venison

There is something particularly good about coming out of a gallery and “feeling physically better” about life. Your head is lighter, a strange sense of euphoria pervades your limbs and your eyes feel like they have seen just about enough for the day. This is how I felt coming out of Joana Vasconcelos’ exhibition at Haunch of Venison in London. I have to admit that I did not go to see the show with great expectations. The artist became popular on the back of the 2005 piece A Novia, a five-meter high sculpture of a chandelier made entirely out of tampons. Imposing, but not my favorite. However, the offering at Haunch of Venison is substantially different and so extremely varied as to dispel any doubt that Vasconcelos may be a flash in the pan. The opposite is indeed true. The exhibition feels like a retrospective of a mature and consumed artist who has traveled the art world far and wide.

There are two main factors that make Vasconcelos’ exhibition engaging and exciting. One is the technical skill involved in her magical enveloping of cotton crochet, the other, is the eclectic taste for different materials: from fabric to ceramic, to plastic, tiles and rubber. Vasconcelos seems to be able to make convincing art out of any materials, and to do so with equal conviction and effectiveness almost every time.

The use of crochet in Vasconcelos’ work is at once ironic, mesmerizing and disturbing. Crochet is the epitome of traditional femininity. Not only it is a craft that requires dexterity, ability, endurance and patience; crochet is a silent and contemplative practice that metaphorically signified “thinking”. Anyone who has observed someone working with crochet must have noticed that through the speed of repetitional movements performed by the hands, the mind find space for wandering through a cathartic state. Also, let’s not forget that crochet is implicitly un-cool. Or so it was before Vasconcelos claimed it from the hands of grandma in order to overlay it to her artistic context. How many teenagers have you recently seen on the train working their ways through the intricacies of the most complex crochet patterns? Probably none yet. It is therefore interesting to note that though Vasconcelos is not even 40, her dexterity in the crocheting is second to none.

Joana Vasconcelos, Reptila, 2010
Mixed Media
Courtesy of the artist and Haunch of Venison

Upon entering the main room at Haunch of Venison we encounter a baby-grand piano, deliciously covered by white cotton crochet. Everything is here overlaid by the threads and patterns; every little detail. You can check the edges, the underside, the hidden corners and nowhere you will find an uncovered surface or a messy and rough one. Vasconcelos’ weave is smooth and homogeneous in quality, perfectly patterned and elastically stretched around the piano and its stool. Enveloping the object represents knowledge creation. Similarly to somebody’s gaze, which could not otherwise be visually represented. The crochet threads draw trajectories that overlap those of the viewers’ eye. The message is clear: viewing and knowledge are intertwined and the observed object does not effectively exist prior to the creation of knowledge of such object. The crochet is knowledge: knowledge of time and knowledge of space. The piano represents a play on virtuosism; covered in crochet it becomes unplayable, muted, but the complexity and intricacy of form of the threads equals those of a piano performance.

Vasconcelos casts her crochet on a range of manufactured objects to make a specific point. In another room she has crocheted a series of ceramic animals created by Rafael Bordalo Pinheiro. Here the creation of knowledge refers to nature and the world as a “real entity”, however, like crochet, these animals are man-made and not real bodies, further questioning this knowledge creation. Her work challenges authorship by incorporating manufactured objects which are effectively imbedded in her own hand-made skillful and personal artifact. Where does her work start and that of someone else’s begins? What may be created in a relatively short time (the manufactured object) and with the use of molds and machinery is juxtaposed with what is crafted by hand in a slower and more intimate way.

The artist also likes to create gigantic poliform objects made of fabric, that usually hang from the ceiling. In I Will Survive we are offered two different variants on this theme. One, titled Mary Poppins is made of different fabrics from around the world which have been stitched together in multicultural hybridity. The other, Victoria is a gothic looking hybrid of wasp, snake and woman which consistently changes shapes depending from what angle you look.

In Passerelle (Catwalk) Vasconcelos uses ornamental ceramic dogs in order to address multiple concerns about our relationship with animals. The ceramic dogs in question belong to the family of kitsch objects that in Europe can be purchased in gardening centres as well as at refreshment stores in gas stations. Upon entering the gallery space, these dogs become symbols of our relationship with pure bred canines, referencing the manufacturing of perfect forms. The dogs hang from a mechanical overhead conveyor summoning the chilling echo of slaughterhouse processes. The conveyor lies still until a viewer pushes a foot pedal connected to the structure; as the machine is activated, the ceramic bodies begin to swing and hit each other. Noise of crashing ceramic invades the space; some bodies shatter, creating a field of dead animal fragments and shards on the floor underneath. I can’t help but stand bemused in front of the result, puzzled by the divergence of the emotional responses that the vision provokes. What brings us to push the pedal? As the carousel stops, would we want to see more and push it again?

The show stealer is Garden of Eden a vast installation work which sees hundreds of fibre-optic kitsch flowers glowing in a deeply darkened room. The effect is breathtaking as it is simple. Suddenly we are in a magical garden in the middle of the night. The glow of the electric flowers guides the way, as the sound of the motors that make the fibre optic change in colour resembles that of crickets.

Of course not everything is excellent in this show and some of Vasconcelos experiments with different materials are not as successful and convincing as others. Most notably, an abstract panting titled Hyperconsumption is covered with plastic packaging in order to comment on our cultural reliance on surface in opposition to substance. In comparison to the complexity presented by its companions, this simplicity stands out, but not in a positive way. There are however only a handful of these ‘too direct pieces’ and all the others that do not fall in this category are quite memorable – and I do not use this word very often! 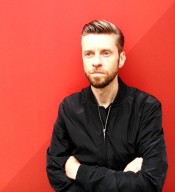 Giovanni Aloi is an art historian in modern and contemporary art at the School of the Art Institute of Chicago, Sotheby’s Institute of Art New York and London, and Tate Galleries. He has curated art projects involving photography and the moving image is a BBC radio contributor, and his work has been translated into many languages. Aloi is Editor in Chief of Antennae: The Journal of Nature in Visual Culture www.antennae.org.uk.