May 2009, Interview with Felice Grodin

Aimee Sinclair: In Evolutionary Study, the graph paper, though mathematical, also has a warmth reminiscent of antique Japanese textiles… How did this choice of paper come about?

Felice Grodin: I went to a print shop on Flagler street and there’s a little corner of the store in which they keep old school architectural supplies - among these things was old school graph paper. I purchased some boxes with no clear intention at that point but I knew I wanted to do something with it. What immediately drew my attention was the effect of the different types of graph paper against each other - it was almost an optical effect that drew me to it - like camouflage almost. So I began to think about nature and to see the graph paper as both a document and something that has its own life at the same time. It became what I now call a hypothetical evolutionary study of invented species. These species would emerge and recede within the study itself the way animals emerge and recede within their natural habitat; hence the camouflage affect.

Like a lot of my work it is both about the organic and the man-made, or the tension between them... or something that’s organic versus synthetic.

AS: Why have you chosen to explore this theme in your work - is it consistent?

FG: Since my background is architecture, along with that comes many specific ways that you were trained to look at the world. For me, there was this idea of the struggle between the molding and the creating of one’s environment vs. being overtaken by it. Specifically, my drawings have a lot to do with that idea. Take for example, “ The Call of the Wild,” there is a struggle within the drawing in which it wants to go beyond its own limitations and that in some way there is a spatial battle going on.

AS: How does the technique help play a role in achieving this pictorially?

FG: I attempt to trap both an unyielding precision and something entirely emotive so that you don’t see the drawing but feel the drawing.

AS: “Tata” stands out for me in the way that it produces a feeling of claustrophobia - the details are so tightly fitted and meticulous yet not orderly...

FG: That piece, like all of my work is about transformation. Tata is that, in its extremity, in that it represents personal struggle but there’s also a universal idea – Tata is about the one and the many. It talks a lot about society and the landscape of place.

AS: “Where Angels fear to Tread” seems extroverted and uplifting while “Tata” appears introverted… Can you discuss this?

FG: That particular piece for me is about redemption. I have always been inspired by depictions of the resurrection and the last judgement, that space between heaven and earth. That space between the sacred and the profane always interested me. 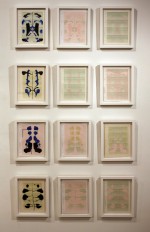 Aimee Sinclair is a writer in Miami
aimee_sinclair@yahoo.com