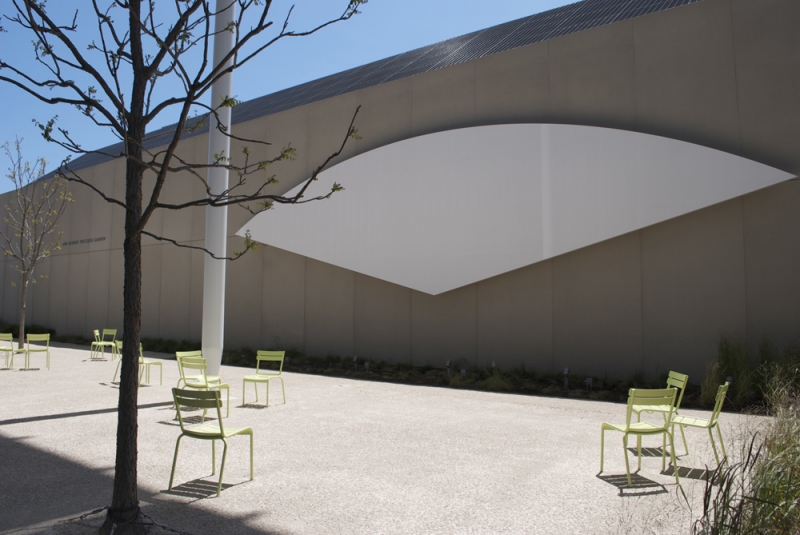 Hidden outside from the hustle and bustle of the inaugural week of the Art Institute's addition of the Modern Wing lies an oddly shaped large painted piece of aluminum. The sculpture's location is unique, hidden amongst the new maze of gallery space. But regardless of its location, the piece holds a significant place within the museum's permanent collection.
Ellsworth Kelly's White Curve is the only site-specific installation commissioned for the expansion. It is hung on the south wall of the Pritzker Garden among trees, green patio furniture, and tapering structural supports for the building's "flying carpet." The placement of the piece is strikingly odd and will more than likely be ignored by employees who eat lunch there or by visitor’s letting their children run free in the garden. But, Kelly's piece is not to be a backdrop to the new iconic Chicago building, by Renzo Piano.
White Curve is Kelly's largest wall sculpture and it acts as an important testament to the collaboration between architect and artist as well as a milestone in the artist's career.
Looking through a second story window on the east side of the Modern Wing, one catches a glimpse of the sculpture. The stark-white paint gives the illusion of negative space cut from a stucco wall. The shape, oddly enough, resembles a Victorian "eyebrow" window, peeking from the galleries. Once outside in the garden, the magnitude of the sculpture is registered. The size is magnificent, but paired down by Piano's wall. The sculpture measures 54x14 on a 250x26 foot wall. The surface is subtly reflective, unusual for Kelly. Piano's architecture can been seen in the white void, while the sculpture's mass can be seen when looking into the museum's windows, opposite the piece.
Piano initially gave Kelly space for his work on a 14 foot high wall, but after Piano saw the plan, he increased the space to reach 26 feet. The director of the museum states why Kelly's work is secluded by Piano's architecture, "we want the garden to be an oasis that is in harmony with Renzo’s architecture, a place that is powerfully quiet," a place absent from objects on all four walls.
It has been fifty-three years since Kelly's first collaboration with an architect. In 1956 Kelly was commissioned to create space dividing screens and a lobby tympanum for Vincent Kling's Transportation Building at Penn Center. Although these two pieces have a function vastly different from his wall sculpture in Chicago, there are many similarities between the pieces. Both made from aluminum, Kelly relies on space, tension, and shape in order to successfully create sculpture. The progression of Kelly's work has appropriately transformed his new piece into the realm of the contemporary.
In line with Kelly’s other works, the sculpture plays with space. Kelly’s earlier monochormatic canvas’s stand alone as positive space (The Chicago Panels), while some others play with the definition of space by having white “voids” blending into museum walls, such as East River, 1959. White Curves seems like an achromatic void on Piano’s wall, calling one’s attention to the location: an exterior wall.
Kelly’s choice of white for his sculpture is perplexing. Piano’s building aligns with modern architecture, all materials and walls gleaming white, all except the backdrop for Kelly’s piece. One wonders if he was creating a site-specific installation inside, would the curve match the color of the wall? Probably not. The fact that Kelly is removing his art from the gallery is significant. In today’s time, we rarely need a white wall to define “art.” This is what Kelly and the commission is hinting at: art in the garden, while having lunch or watching your rambunctious child hide under the green chairs.

Shiloh Aderhold, a recent graduate from Wittenberg University, is an art historian, critic, and artist from North Carolina and Georgia. She lives and works in Chicago.  seaderhold@gmail.com