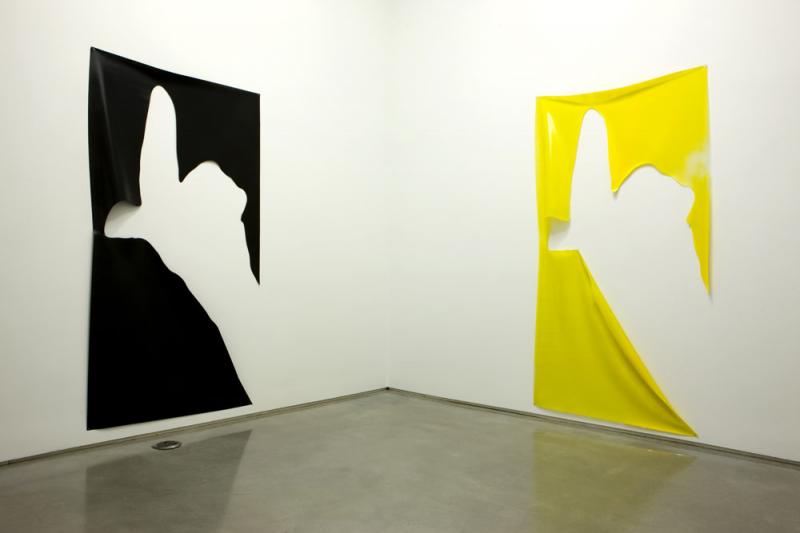 
Gone are the infamous free-standing foamcore sheets, but for his first New York solo-show, Untitled ’09, British Columbia-born Davis Rhodes continues to explore deconstructive painting with a new collection of cast-off materials. This time Rhodes has stapled sizable sheets of vinyl directly to the walls, almost completely covering Team’s two main galleries. A stunning array of pantone colors optically confront the viewer upon entry, forcing the eye to travel from one piece to the next. The amount of space allotted to the work is substantial, but there is no standing back to take in one particular piece. The works are so close together, separated only by a slim strip of white wall; it’s a show in bulk. Broken into three repetitive cycles of sub-groupings, Rhodes’s installation is based on the exploration of slight variations, the re-integration of altered graphics.

Here, Rhodes continues his ethnographic fascination with the ephemeral commercial ads surrounding his Brooklyn studio, mining, distilling, and then re-presenting the fragmented images. A frequent piece of source material remains the number 1 and there are several in this show, the numeral concentrated in an intense typeface, as bright as a new paint job on an old Trans Am. In these, hard-edge painting intersects with gesture; the imperfect edges of paint seep beyond the stencil, leaving splats and scrapes on the otherwise crisp monochrome backgrounds. All of the periphery promotional information from the inspiring ads has been erased, leaving only a silhouetted shape, front and center. Ad copy intended for only temporary existence is now memorialized on the gallery walls.

In direct play with the “1”s are a series of cut-out sheets that reveal an outstretched pointer finger, thumb off to the side, in frozen boastful declaration of the highest status: number 1. While the “1”s are framed by the vinyl, the hands extend off the work where Rhodes has cut all the way to the edge of the vinyl at the wrist. Clyfford Still said, “To be stopped by a frame’s edge was intolerable”, to his advantage Rhodes reconfigures the structural confines, creating a reverse silhouette.

Many of the numerals, or Newman-esque “zips”, have been ferociously slashed, the vinyl allowed to simply collapse into flaccid waves. They have the feel of an homage to Steve Parrino. It’s painting as performance, as the audience is forced to consider and engage with the fallibility of the three-dimensional painted surface. The tears of the digit are eroticized by the lush hues: lipsticks reds, jet blacks, and hyper-glossy greys represent shiny, floating, latex fetish objects. The drapery feels far too sensuous to have been exacted via simple scissors; rather, they appear to have been harshly manipulated by hand without constraint. Shouldn’t more painting be destructive one moment, seductive the next? 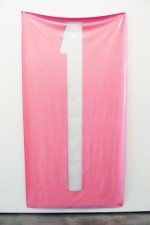 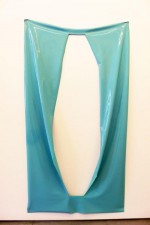 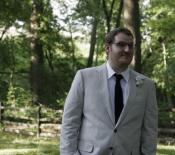 Daniel Fuller is the Senior Program Specialist at the Philadelphia Exhibitions Initiative. As part of this position he works as a curatorial consultant on behalf of the region’s visual arts community. He has frequently written essays for Art on Paper. Recently, he served as a guest blogger for art:21; wrote an essay on Jon Pylypchuk for his solo exhibition at the Blaffer Gallery - The Art Museum of the University of Houston; and has written a review for Art Lies Magazine. In the past, he has worked in curatorial positions at the Hudson Valley Center for Contemporary Art, Peekskill, NY, and Peres Projects, LA.