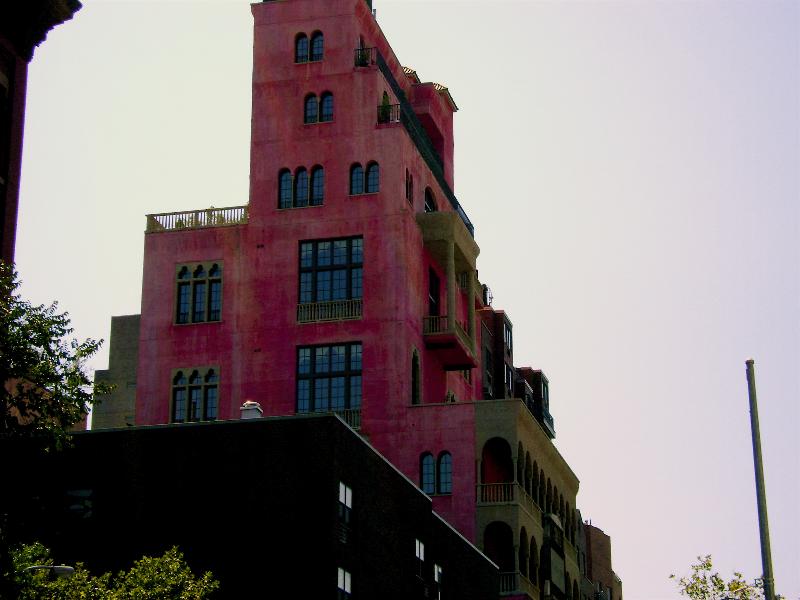 Pink, Pretty In Pink, The Big Pink, In The Pink, Pink Cadillac, Tickled Pink, Pink Flamingo, Pink Floyd, and Little Pink Houses, well this isn’t one of those, it’s grander than that, which is the only way Julian Schnabel knows how to do things. This is Julian Schnabel’s Pink Palace that has West Greenwich Village up in arms.

Julian playing his usual and always well-played provocateur has done it again, not with his art, not with his music and not with his movies but with his decorating. It seems he bought a 14-story building that was over his studio; it was originally a stable. He has renovated the building, keeping it under wraps so nobody was the wiser to what he was up to and when he finally unveiled it, much to the chagrin to the local aesthetic police, it was pink! Julian plans on living there and do some real estate business on the side. Richard Gere bought in for 12 million dollars and flipped his space for 18 million dollars and recently Bono was touring the joint looking at a 32 million dollar duplex. Palazzo Chuppi, as Schnabel has named it, is another controversy that puts Julian back in the limelight, but this controversy has to be seen to be believed, so I decided to take a trip down to the West Village and see what all the excitement was about.

As I traveled by subway to the scene of the crime, I thought about Schnabel who came to light with his broken plate paintings in the early eighties and has been on the stage since with his art, his music, he produced his own album, Every Silver Lining Has A Cloud, and his movies that have won him worldwide recognition as a director, and include, Basquiat, Before Night Falls, The Diving Bell And The Butterfly and his recent collaboration with Lou Reed, Berlin, the movie. He also wrote his own biography before he was forty entitled, CVJ: Nicknames of Maitre D’s and other excerpts from life. It was never said that Julian Schnabel was a wallflower.

I’ve had several run-ins with the great one, two I can tell, and one I will keep to myself. The first was in the mid-eighties, Schnabel was doing a talk at Pace Gallery in Soho for an attentive gathering, his huge painting fillings the space opulently. As he talked he smoked a cigarette and as he smoked the ash on the cigarette slowly grew, never once did he ask for an ashtray and as I watched with great amazement he smoked the butt to the filter, the complete cigarette was ash and remained in perfect place. I picked up a napkin and walked to him and held it out, he place the ash on it and it did not disintegrate, I threw it away and regret it to this day in this Ebay auctionable world. Another time at a gallery on 57th Street, he had created these abstract works on huge pieces of animal fur, not my favorite works but truly Schnabel in their grandeur, while I was there in walked a gaggle of Madison Avenue matrons led by Julian who he talked to like they were children and the most hilarious thing about it was they were all wearing fur coats. PETA would have had a field day.

I thought about these events as I got off the subway and walked to West 11th Street. It’s interesting to note that Palazzo Chuppi is on the same street as the White Horse Tavern, the infamous pub where Dylan Thomas drank himself to death. I stopped in for a beer because it is sacrilege to pass it without imbibing. A block away from the pub is a Stop sign so I stopped and looked up and there was the top of the palace, a pink diadem popping up from behind another brick building. The pink wasn’t as hot as everyone was claiming; it was barely a shade past the brick buildings that are plentiful in the West Village. In fact, I wondered why the whole pink thing was so controversial, not to stereotype anyone, but seeing as though that the Palazzo is in the West Village, one of the most famous gay neighborhoods in the world, isn’t pink appropriate?

I got closer to the building and looked up, it was like a magical, floating castle with huge archways and gigantic doors. I took pictures and was excited to see a humongous piece of art on an elevator waiting to be lifted up. It was one of his. I stepped back to look at the huge placard that adorns the façade: Palazzo Chuppi. I walked across the street and looked with envy at the startling piece of art that is a building and realized that most of the whining about the structure was pure and simple jealousy. I found fault with the words of Andre Berman, Director of the Greenwich Village Society, when he stated “I think virtually any other color would have been more acceptable.” and continuing that Schnabel’s intent was to make it “as ugly as possible to make it stick out like a sore thumb.” My feeling on the subject is that it is not a sore thumb at all, but a beautiful middle finger raised in defiance, declaring to the world that I’m number one. Rock on Julian.
whitehot gallery images, click a thumbnail.

Charles Long is a writer in New York.
ccl3@earthlink.net