One of my favorite New York galleries has an exhibition of paintings by Cecily Brown. At her recent opening at Gagosian Gallery in Chelsea, whose immaculate walls reflected in a glowing blue light, her most recent subject matter seems to be an optical wall of paint, almost like a giant master palette, with omega configurations behind it rather than, placed in the alpha pecking order as in a Richard Serra, gender centered, in front of the picture plane.

Instead of blanketing a combination of super realism or optical motifs weaving through the abstract art as with Krishna Reddy’s intaglio prints at Thomas Erben Gallery, Bjorn Copeland’s work at Roebling Hall or Ryan Humphrey’s work at DCKT Contemporary (on the “new” Lower Eastside), Cecily Brown, prefers more of the Slade Art School approach. Rather, she injects the dense drapery of strokes with great musculature and “no frills” painting by eye, knowing deep down inside that she is a follower of the flesh. Euphemistically, Brown paints with a glass palette. Brown’s work fuses her amplified, dualistic palette with action painting of the figure. All the while she remains highly aware of the power of destruction and irony of her own creations in this day and age.

Cecily was born in 1969 in London. Her mother was the writer, Shena Mackay and her father was David Sylvester, the preeminent art critic and independent curator of the era. He wrote extensively on modern art in England, in particular the work of Lucian Freud, Francis Bacon and Henry Moore. He also promoted Richard Hamilton and the British Pop Art scene.

The first alarm sounded when he suddenly ripped open her chemise, exposing her small, pointed breasts, and began to kiss and fondle them vigorously before sliding his hands farther down her body, venturing more daring caresses. The sensations in his fingers aroused in her were glorious, but suddenly they ceased, leaving her desperate for more. He was going too fast for her, fumbling with the points of his codpiece, all the while breathing heavily against her face and whispering words she could barely make out. Then hastily he pulled up her chemise, baring her thighs and buttocks to the shock of the cool morning air. Distracted, and suddenly belatedly aware that she was well on the way to committing not only a sin but also high treason, Elizabeth tried to fend him off, but found her young girl’s strength no proof against his masculinity. Blind to her struggles, Thomas was already on top of her, his knees holding her legs apart, then he was forcing himself hugely within her, thrusting backward and forward with increasing vigor.

A beautiful woman in a gray dress with a cowl neck and twisted, accordion pleats wandered around looking at the paintings which are priced around $700,000.00. Another statuesque girl looked great in a dress that was a copy of a 1940's vintage design. Chuck Close looked closely at each painting and swiveled his wheelchair around to eye the crowd. Alex Katz and his wife, Ada looked very cheerful. John Goode, who originally worked for Leo Castelli and is now a dealer at Gagosian, mingled with the crowd. Koury Wingate greeted people as he always does. Larry Gagosian, himself, sat at the reception area. I also saw Klaus Kertes, Jerry Saltz, the critic for New York Magazine and Cecily Brown, who finally arrived was surrounded by well wishers.

I had first met Cecily who, who was sitting next to me in a dark bar in around 1988. I had just gone shopping for a baby blue, vintage dress which I would wear to some French gallery in Soho where they showed antique paintings alongside the avant garde work. She was staying at Malcolm Morley and his girlfriend, Lita’s loft on the Bowery and we went there. She had created a sculpture out of rolls and rolls of toilet paper that totally covered his living room, which was decorated with Mission style furniture, with toilet paper bunnies.

Les Levine wanted to do a movie called, “Women and Art” and had cast us along with Matthew Barney’s then wife, Mary Farley, in it, but it never happened because the young woman who was supposed to be the woman artist’s “muse” was unsure about what her role was and I backed out of it. At the last minute I canceled and Levine abandoned the project. He had already hired a makeup artist. I had felt that an anonymous woman reminded me of the painter, Reginald Marsh’s depictions of life in New York City in the 1920s. Without a certain mood, it wouldn’t capture on video the way it felt to be a working girl.

She reminded me of Kiki Smith and her sister, Seton whose art careers skyrocketed with the help of already having been “insiders” as the children of the famous Minimalist sculptor and architect, Tony Smith. Saul Bellow’s son, Adam has recently written a book called “In Praise of Nepotism.” A hardcover book on Cecily Brown’s paintings, co-published by Rizzoli.

Cecily’s exhibitions have included the Hirshhorn Museum and Sculpture Garden in Washington, D.C., the Museum of Fine Arts in Boston, P.S. 1 Contemporary Art Center, Long Island City, NY, the Des Moines Art Center, Iowa, Museum of Modern Art in Oxford, England, Kunsthalle Mannheim and Museum für Moderne Kunst, Frankfurt am Main in Germany, MACRO in Rome, Italy, and the Museo Nacional Centro de Arte Reina Sofia in Madrid, Spain. Her paintings are the in collections of the Solomon R. Guggenheim Museum and the Whitney Museum of American Art in New York, the Albright Knox Art Gallery in Buffalo, NY, The Broad Art Foundation in Santa Monica, CA and the Tate Gallery in London. 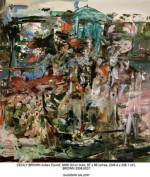 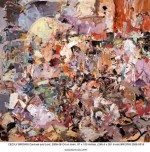 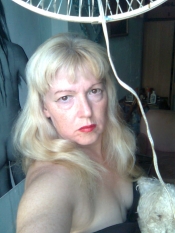 Claudia Schwalb graduated from Pratt Institute in 1974.  She was an emerging artist during the Minimalist movement in the 1970's.  She was raised in New York City during the Abstract Expressionist era. Claudia was the youngest artist ever to have a solo exhibition at The Clocktower/P.S.1 in 1977.  Claudia went on to write for Barbara Rose's Journal of Art and was one of the Contributing Editors of Cover/Arts New York along with John Yau and Judd Tully (Editor-at-Large for Arts & Auction).  She was Curator of the Knitting Factory and a television news transcriber for Peter Jennings' World News Tonight.  Subsequently, Claudia transcribed two movies, "Refuge" and "Interview with the Dalai Lama" which played at the Quad last year.  claudschwa@aol.com